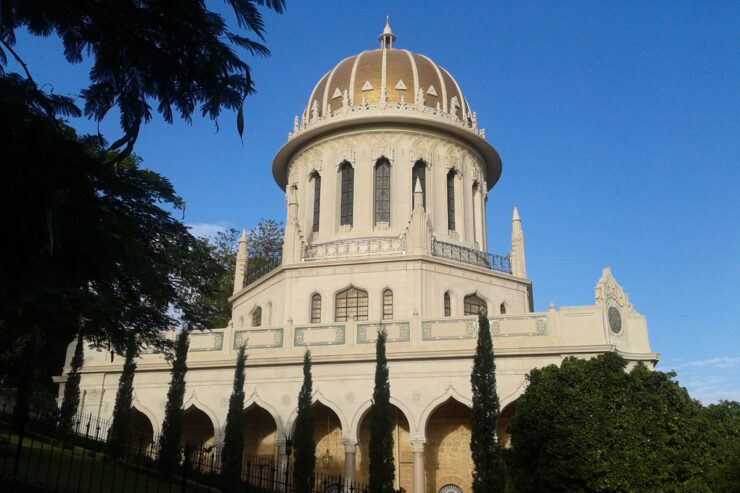 Bahá’ís are encouraged to make a pilgrimage to the special places and shrines in the Holy Land at least once during their lives.  Some people go on their own or with a friend; others make the pilgrimage as a family.

I went on pilgrimage several years ago, but last year, I was looking forward to making a pilgrimage again, with my friend Jane.  We had booked flights from the UK to Israel and were due to arrive at our accommodation on 22nd March, ready to start our organised programme of visits on the following day.  Then the Covid-19 pandemic struck.  For a few nail-biting weeks, we wondered whether our trip would be cancelled altogether; whether our flight and accommodation costs would be refunded; whether we could reschedule for later in the year; or whether, just maybe, things would settle down and we would be able to travel as planned.

A few days before we were due to depart the UK, we learned that the Israeli government had asked all visitors to the country to quarantine for 14 days.  A Bahá’í pilgrimage last for 9 days, starting from the day of arrival. So not only would this stop us from participating in any part of the organised pilgrimage programme, we also only had our AirBnB booked for 10 nights so we would be homeless for 4 nights of our quarantine period!  Clearly we had to cancel.  Shortly afterwards, all Bahá’í pilgrimages were officially cancelled for 2020 and the first part of 2021.

So, what happens on a Bahá’í pilgrimage?  The first thing you become aware of is that pilgrims – usually several hundred of whom are participating at the same time – are treated like honoured guests by the resident staff at the Bahá’í World Centre in Haifa.  You are placed in a group of around 40 people (usually those who know the same language) who are taken in a coach to various places in the Haifa and Akka area. Most important of these are the two Bahá’í shrines dedicated to the Báb and Bahá’u’lláh. (A new shrine is in the process of being built in memory of ‘Abdu’l-Bahá.)  The other visits are quite varied but include the fortress where Bahá’u’lláh was kept prisoner, one of the houses where He was kept under house arrest, and the last home where He stayed when He was given more freedom towards the end of His life.

You stay with the same small group for the whole 9 days of your pilgrimage tour, but there is also opportunity to get to know the other pilgrims who come from many different parts of the world. On some of the evenings, pilgrims are invited to attend talks given by members of the international Bahá’í institutions based in the Haifa area.  And you have some free time, to explore your surroundings, sample the delicious local food, meet up with friends old and new, and just sit quietly and experience the peaceful and prayerful atmosphere of the shrines.

Jane and I have been fortunate enough to get a new date for our pilgrimage, in 2022.  I am sure that the waiting will make the experience all the sweeter!